An avalanche is a large slide of snow down a mountainside, caused when a buildup of snow is released down a slope.  It is one of the major dangers faced in the mountains in winter.

A large avalanche can run for miles, and destroy anything in its path.  For example, in Montroc, France in 1999, 300,000 cubic metres of snow slid on a 30 degree slope, achieving a speed of 100 km/h.  It killed 12 people in their chalets under 100,000 tons of snow, 5 metres deep.  The Mayor of Chamonix was convicted of second-degree murder for not evacuating the area, but received a suspended sentence.  During World War 1, over 60,000 soldiers died as a result of avalanches during the alpine mountain campaign. 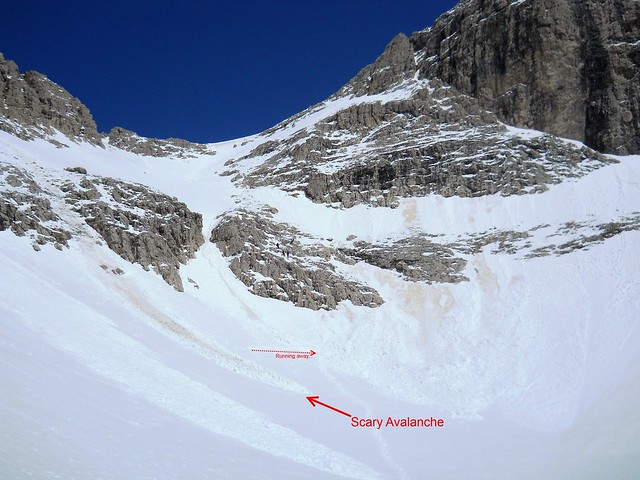 Near miss with a scary Avalanch

Avalanche conditions are caused by weak cohesion between adjoining layers of snow or between the snow pack and the ground.

Evaluating the causes of a slope avalanche is complicated as it involves a number of factors.  These include:

Steepness:  while slopes of an angle as little as 15 degrees can avalanche, slopes under 25 degrees and over 60 degrees are typically low avalanche risk because snow doesn’t accumulate significantly on steep slopes and does not flow easily on flat slopes.  The angles of slope most prone to avalanche are between 30 and 40 degrees.

Direction:  the three main influences on the development of the snowpack are temperature, precipitation and wind.  In Europe, most accidents occur on shady slopes with northern and north-eastern aspects.  Leeward slopes accumulate more snow and this results in locally deep areas and windslabs.  Cornices also develop on the downwind side of ridges, and can contribute to avalanche danger.

Profile:  convex slopes are statistically more dangerous than concave.  At the back of a concave slope, snow is compressed and reasonably stable.  On a convex slope, the snow is stretched within the pack and on the outer service, so cohesion can fail.

Surface:  full depth avalanches are more common on slopes with smooth ground cover such as grass or rock slab.  Vegetation cover is important for anchoring the snowpack, although in certain snowpacks, boulders or buried vegetation can create weak areas within the snowpack.

The structure of the snowpack determines avalanche risk.  Avalanches require a buried weak layer (or instability) and an overlaying slab.

New snow:  has not had time to bond with the layers below, especially if it is light and powdery.
Snow depth:  snow above the layer of boulders and plants on the slope has none of these natural objects to help anchor it to the slope.

Snow crystal size:  generally speaking, the larger the crystal, the weaker it is.

Weather determines the evolution of the snowpack.  The most important factors are heating by solar radiation, radiational cooling, temperature gradients in snow, and snowfall amounts and type.  Most avalanches happen during or soon after a storm.

Temperature:  if the temperature is high enough for gentle freeze-thaw cycles to take place, the melting and re-freezing of water in the snow strengthens the snowpack during the freeze cycle and weakens it in the thaw cycle.  Temperatures rising significantly over the freezing point can cause the whole slope to avalanche, especially in spring.  Persistent cold temperatures contribute to the formation of depth hoar.  Depth hoar occurs where a high temperature gradient exists within the snow – between the base and surface layers of the pack.  Where a large gradient exists, water vapour migrates through the snowpack and forms extremely fragile cup crystals – depth hoar.

Wind:  wind can contribute to the rapid build up of snow on sheltered slopes (downwind), while the wind pressure can also stabilize other slopes.  “Wind slab” is a particularly fragile brittle structure – heavily loaded, poorly bonded.  Even on a clear day, wind can quickly shift snow-load to the snow pack.  This can occur in two ways, by top-loading, where wind deposits snow parallel to the fall-line, or through cross-loading, which occurs when the wind deposits snow perpendicular to the fall-line of a slope.  When wind blows over the top of a mountain, the leeward, or downwind side of the mountain experiences top-loading.  When the wind blows over a ridge that leads up the mountain for example, the leeward side of the ridge experiences cross-loading.  Cross-loaded wind-slabs are usually more difficult to spot and also tend to be less stable than top-loaded wind-slabs, and are therefore much more dangerous.

Heavy snowfall:  causes instability, both through the additional weight, and because the snow has insufficient time to bond.

Rain:  in the short-term, rain causes instability through additional load and possible lubrication of lower layers.  Avalanche also occurs if the upper snow layer is moved.

There are different types of avalanche:

Loose dry snow avalanches:  can be quite large and they form from a single point.  They can reach speeds of up to 40mph, and if faster, can become airborne.

Airborne powder avalanches:  are very destructive.  They can start as a loose dry snow avalanche or slab but become airborne above 40mph.  Other types of avalanche e.g. hard or soft slabs can be pulverised by their own motion and turn into airborne powder.  The speed of this type of avalanche can reach 175mph and cause massive destruction.

Slab avalanches:  occur where there is a lack of cohesion under the snow layer, sometimes with a slab completely unsupported over a large area.  Soft slabs often develop with the accumulation of snow on lee slopes due to wind action.  Most soft slab avalanches are started by people.  Straight edged blocks of snow that break away underfoot, are a certain sign of the likelihood of this type of avalanche occuring.
Hard slabs are one of the greatest hazards in mountain areas.  Winds above 30mph assist the formation of hard slab on lee slopes.  Underfoot, the slab feels as hard as concrete.  When the slab moves, you can usually hear a large cracking noise.  The slab breaks up into large angular blocks which stay intact as they descend.  Hard slab looks dull and chalky and can squeak or boom underfoot.

Wet avalanches:  are common in spring and following a thaw.  They’re caused by water as it weakens the bonds between layers of snow or between the bottom layer and the ground.  This type of avalanche is most likely to occur when there is a heavy snow storm that starts cold and finishes warm.  They can be loose or slab and move fast or slow.  They set like concrete as they stop so are extremely dangerous.  They can be expected at the start of heavy rain and for the following 24 hours.

Ice avalanches:  are a risk when thaw causes an icefall that’s attached to a crag to break off and crash down the hillside.

Cornice collapse:  often happens due to thaw, although they can collapse under their own weight and can be started by the wind.

So what are the warning signs of an avalanche?

You can often spot where avalanche activity has been happening.  Look out for new or old debris on a slope, or a number of small snowballs rolling down it.  You can also feel or hear where an avalanche is likely to happen, with snow cracking or breaking away underfoot, a process you can also hear happening.
Avalanches are most likely on 30 & 45 degree slopes, on lee slopes and in wind sheltered gullies.  Be aware of the slope aspect and look out for the build up of cornices.  Weather can also give you an indication of whether an avalanche is likely with heavy snow fall, wind loading on lee slopes, a sudden rise in temperature, long periods of very warm and very cold weather all adding to the risk.

Tags: IML, WML
This entry is filed under  .