This year the two of us went to Chamonix and Valle d’Aosta (Italy) for two weeks high glacier trekking. 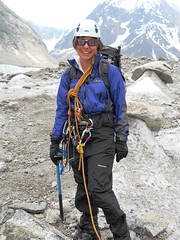 The first week we based ourselves in a fantastic little apartment in Chamonix Sud (details below).

Day 3: Le Brévent (2525m): Awaking to very poor weather, we sat out the morning gently acclimatising in the Aiguille du Midi (AdM) cafe. Finally we took a cable car up to Planpraz and walked up to Le Brévent via Col du Brévent in the afternoon once the weather improved.

Day 4: Refuge des Cosmiques (3616m): As our plan to go up the Argentière Glacier was scuppered by the lift not running, we decided to return to do the up-hill version of the Vallée Blanche Traverse by taking the AdM cable car, then a 2nd cable car across to Helbronner, and setting off back from there.  We also stopped in at the Refuge des Cosmiques on route for lunch.  The final ascent of the AdM snow ridge became rather interesting as a blizzard closed in on us.

Day 5: Glacier des Pélerins (2400m): We took the Aiguille du Midi cable car to its half-way stop at Plan de Aiguille.  The plan had been to cross the Glacier des Pélerins and the Glacier des Bossons to the Refuge des Grand Mulets for lunch and back. However there was significant fresh avalanche and rock fall on the Pélerins so we sacked it off and walked down to the valley from the old disused Gare des Glaciers cable car top station. The views of Glacier des Bossons were fantastic as were the alpine flowers on the descent.

Day 6: Refuge Tete Rousse (3167m): We took the early bus to the Bellevue cable car from Les Houches to connect with the first Mont Blanc train to Nid d’Aigle. The plan was to walk up to Refuge du Goûter and back to catch the last train down. We arrived at Refuge Tete Rousse in good time overtaking many groups on the way up, however the Grand Couloir was filled with deep snow and we decided this would slow us down too much. Instead we had lunch at the Tete Rousse and had great fun descending the steep snow off the end of the little glacier back down to the station and then we walked back down to Bellevue which lived up to its name. 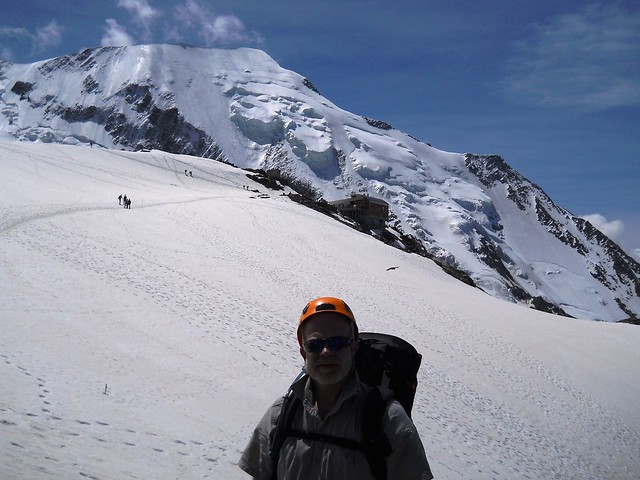 Day 7: Refuge du Requin (2516m): The plan had been for a 3 day hut to hut expedition around the Mer de Glace: Montenvers to Refuge du Requin to Refuge du Couvercle (via Ref. Leschaux) and back, as described here. However the weather forecast was not good – so instead we just walked up to the bottom of the Requin ladders for a quick look and then went to stay in Courmayeur two days earlier than planned.

We transfered to Courmayeur via a Savda bus through the Mont Blanc tunnel, and checked into the Hotel we used as a base for a second week.

Day 8: Petit Flambeu (3440m): We took the Helbronner cable car from Courmayeur to the Vallée Blanche. However the weather was quite poor so we spent a few hours getting lost in freezing fog on the glacier and finally summitted the tiny peak of Petit Flambeu. This was more than most of the guided groups that we met had achieved.

Day 9: Day trip to Aosta: The weather was poor so we went shopping in Aosta to find cheap beer and some gaffa tape to repair split crampon anti-balling plates. Nice ice cream too.

Day 10: Refugio Chabod (2710m): We took the local bus via Villeneuve and walked up to Rif. Chabod from Pravieux. We then bimbled around in the afternoon looking at the beautiful alpine flowers and the stunning views. 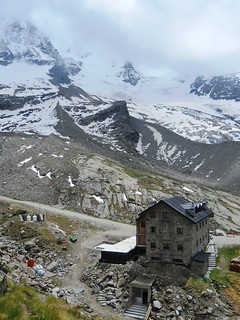 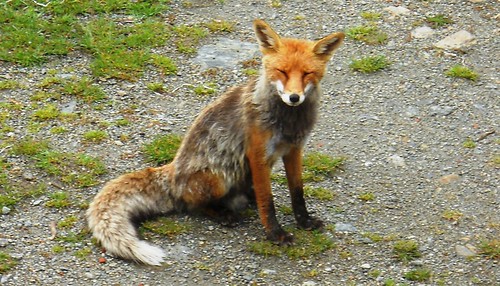 Day 11: Rifugio Vittorio Emanuele II (2735m): We had planned to walk over to the Vit. Emanuele across the glacier, however the weather was very poor so we took the easy walkers path (5a) around in the rain and fog. We particularly liked the semi-tame fox that lived near the Emanuele and came round for scraps in the morning.

Day 13: The plan had been to climb La Tresenta (3609m).  However, we awoke to gale force winds at 4.00am (which blew our window and door wide open) and as the weather was still awful when we finally got up for a late breakfast at 8.00am, we decided to sack our plans and descended to Pont in the valley.  We returned to our Hotel in Courmayeur a day earlier than planned and watched a live Gallic music concert in the afternoon.

Day 14: Mont Chetif (2343m): We walked up this fantastic view point from Courmayeur and spent the afternoon watching huge ice séracs fall off the end of the Mont Blanc Brenva glacier. We also saw a golden eagle and some sort of red kestrel too.

The first week we based ourselves in a little apartment in Chamonix Sud called “Chamois Blanc 420“. This place was fantastic: good value for money, very convenient for the Aiguille du Midi cable car and surprisingly well equipped – highly recommended.

The second week we based ourselves in a rather chaotic Hotel in Courmayeur  called “Hotel Tavernier“. Very friendly staff but just a bit mental!

We used Easy-jet to fly to Geneva.

We used Chamexpress for our Geneva Chamonix transfers.

We bought a 7 day pass to cover all the Mont Blanc trains, and other Chamonix cable cars.

This little backpackers hostel does a useful left luggage service in Chamonix for over night hutting trips.